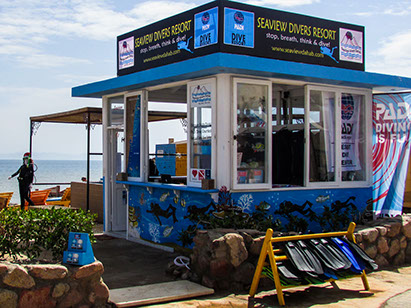 In the north, well recognized for the beauty of the reef and the spirit outside of the water. There you’ll find a small Bedouin village and a few huts similar to how Dahab used to be a few years ago.

Early in the morning, the jeep will drive you to the end of the road, where a camel will be waiting for you, then on a few kilometers to the site. Bedouins will take care of packing the equipment, the tanks and the food on each side of the camel. The Camel is a very strong animal, don’t worry, they can handle it!

After riding the camel for about an hour, you should be at the dive site ready to assemble your equipment and get the dive started. The Bedouins, who will be following, will also take care of preparing the lunch served either between the two dives or at the end of the dive.

At the end of the day, we’ll pack everything again and head back to Dahab. You will follow the sea on the left, the high mountains of Sinai on the right and you and your camel in between…a very nice combination.

Please note that overnight trip can also be organized.

Wreck of the SS Thistlegorm

This is probably the most famous shipwrecks in the Red Sea. Built in June 1940 by Joseph Thompson & Sons of Sunderland, this 126.5 m long steamship was officially launched on the 9th of April 1940. Voyages included the USA to bring back steel rails and aircraft parts, Argentina to return with grains and West Indies for sugar and rum. Her final voyage was on October 6, 1941 when German bomber planes sunk her during World War II.

The SS Thistlegorm is a war grave, an underwater museum, and a unique piece of military history all rolled into one. She lies in the Straits of Gubal, northern part of the Red Sea. which makes it one of the iconic wrecks only found in the Red Sea. From Sharm El Sheikh , divers can reach the wreck by daily boat or during a weeklong safari. This wreck has a good visibility of around 25-30m. However, SS Thistlegorm is not recommended for beginner divers as currents are often strong.

The bow can actually be spotted at 15m below the surface. You can also see the propeller at 27m. Since SS Thistlegorm is quite big, several dives are required to get to know the wreck completely, inside and out. The relatively warm waters, maximum depth of 32 metres and the tragedy, war and mystery that envelope this ship are what makes Thistlegorm one of the highly coveted wreck sites that divers are lusting for!